Posted at 03:27h in SF Market Updates by ruthkrishnan.com
1 Like

Our January report focused mostly on 2020’s annual statistics. This report will put most of its attention on quarterly and monthly indicators, which better illustrate changes occurring as 2020 progressed and 2021 began.

Of Bay Area counties, San Francisco was most negatively affected in the months immediately following the implementation of shelter-in-place. Inventory soared and sales plunged, especially in its condo market. In the second half of the year, buyers rushed back into the market.

Sales volume, very unusually, peaked for the year in December, hitting its highest December number ever. Home sales in January were up 67% over January 2020, a tremendous increase. Year-over-year, house median sales prices are up a little, and condo median prices, divided by size of unit, are down about 10%.

The city remains a very complex market, varying by neighborhood, property type and price segment. And vaccines may alter the dynamics considerably in 2021.

New listings coming on market jumped up in January, as is the norm. The market seems to be heating up much more quickly than typical at the beginning of the new year.

This next chart illustrates the rapid growth in inventory that occurred after the pandemic struck: The spike was heavily weighted to condo listings, which hit an all-time high. In the last 3 months, inventory began dropping quickly – due to increasing demand, a drop in new listing activity, and a jump in listings being pulled off the market by sellers in December for the holidays.

Sales were up 60% and peaked for the year in December (first time ever), and January sales soared 67% above January 2020.

The chart below: Comparing 2020 to 2019, luxury house sales were up, luxury condo sales were well down, and non-luxury home sales were about flat. However, none of these statistics do justice to the rapid acceleration in market activity occurring in the second half of the year.

As buyer demand bounced back, the number of price reductions dropped from the historic high reached in early autumn – however, on a year-over-year basis, the number remains higher than is typical for January.

A much larger number than usual of unsold listings were pulled off the market in December. We expect many of these to be re-listed early in the new year, some of them at lower prices than before. 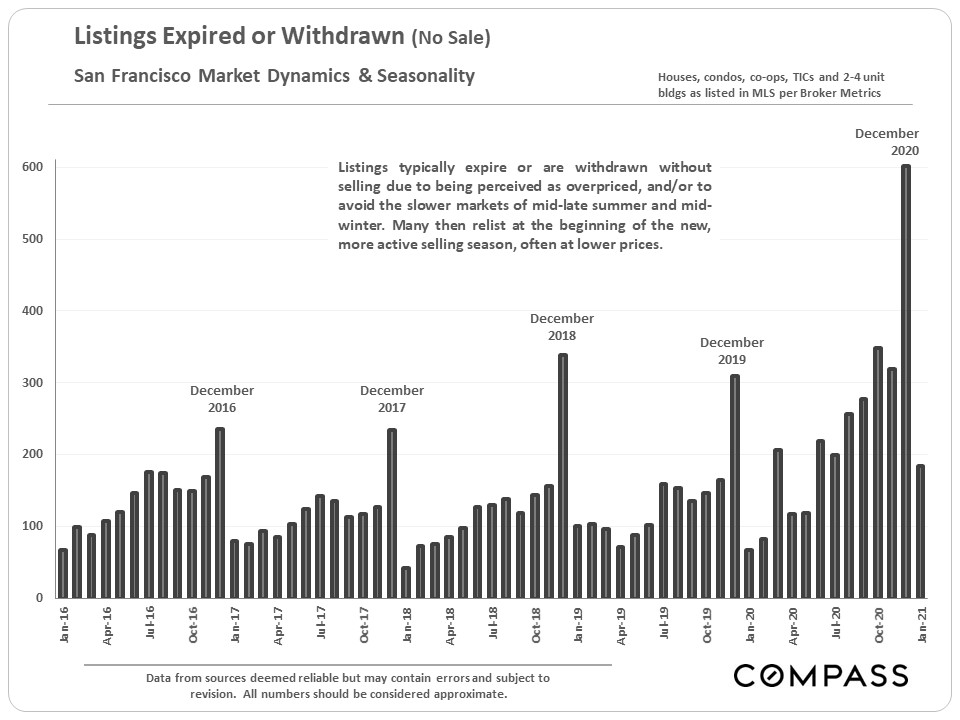 The 2 tables below reflect market statistics and values for Q4 2020 only, by city district (each containing a variety of neighborhoods), first for houses and then for condos. Q4 stats will often be different than those for the full year 2020.

It is not unusual for more expensive markets to have softer supply and demand statistics, though this is not always the case. 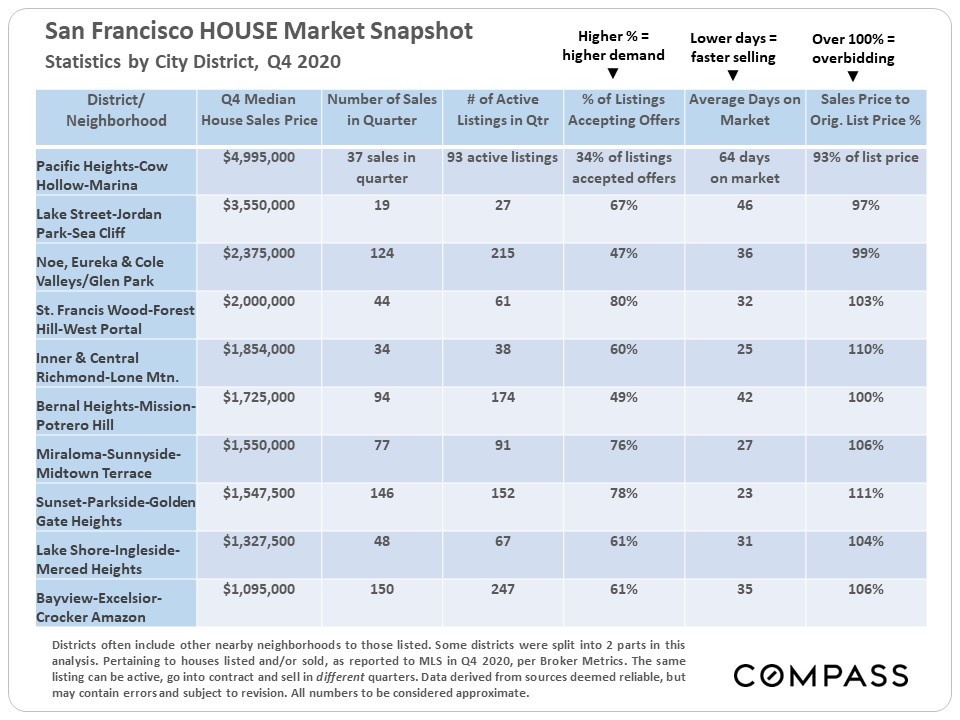 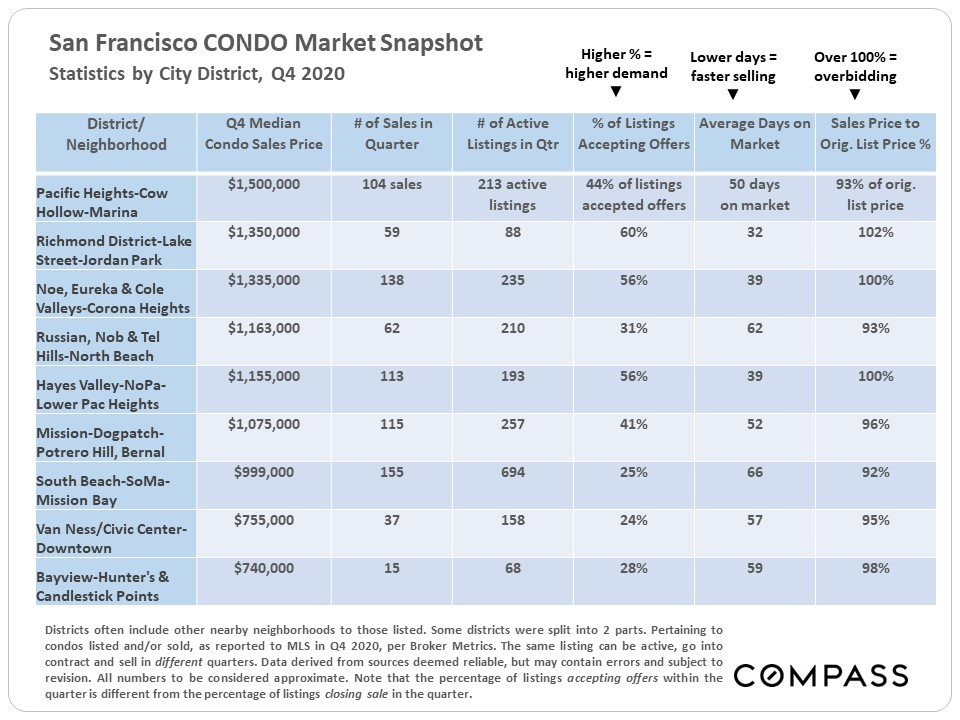 Below is the first of 4 tables reviewing full-year 2020 SF home values by neighborhood. The full report along with a home price map is here: San Francisco Neighborhood Home Prices. And for the entire region: Bay Area 2020 Home Prices. 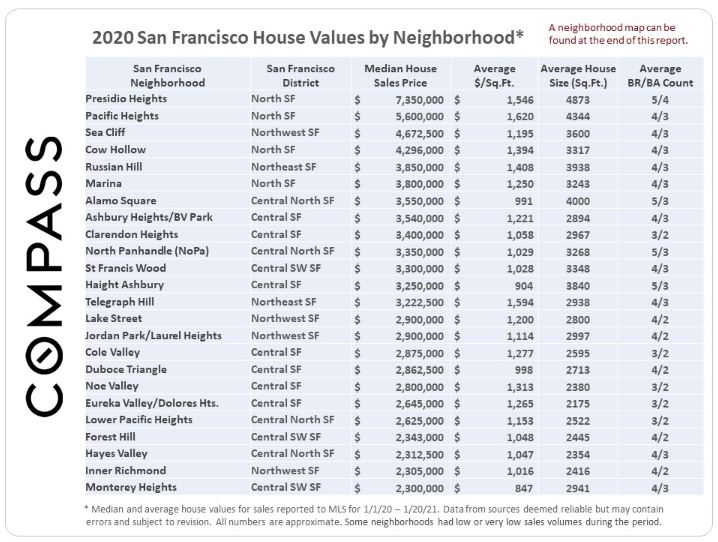 Two major factors behind the Bay Area housing market recovery were the dramatic drop in interest rates, and the significant rebound in the stock market – especially in the stock prices of some of our local high-tech giants. 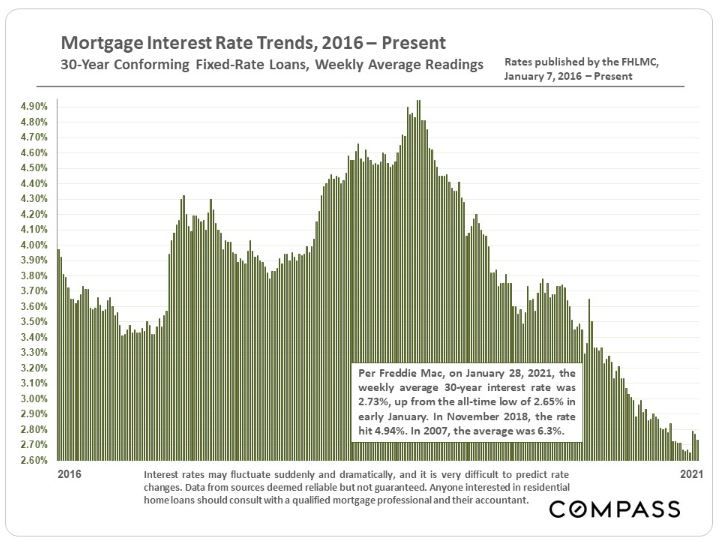 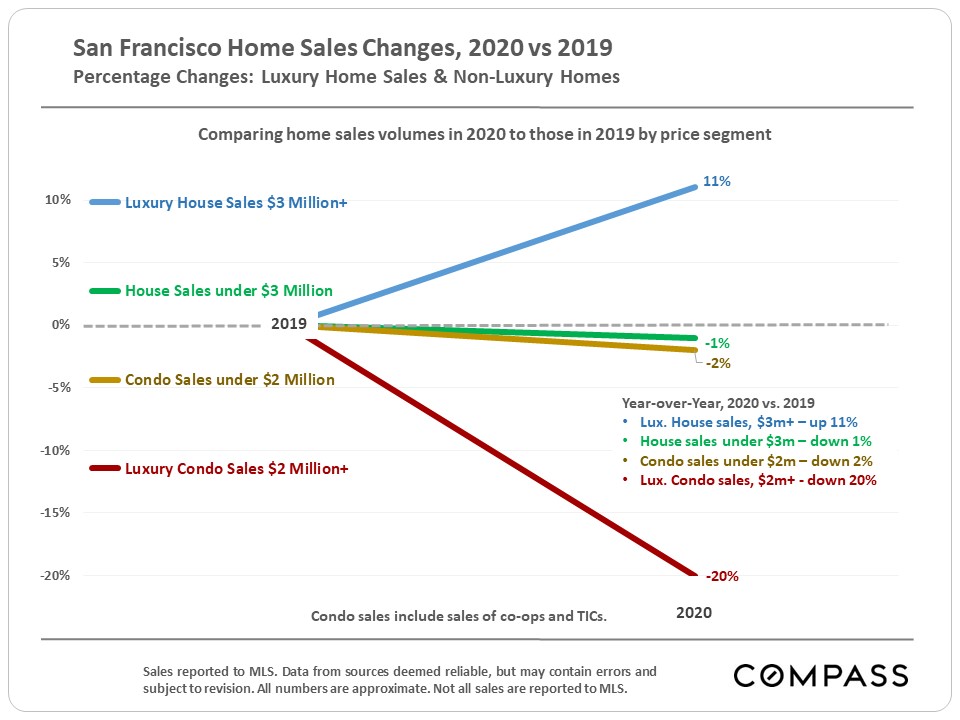 Feel free to connect us to anyone you know who has  questions about real estate in general. If we can’t help them, we know someone who can. Call us at 415-735-5867 for a no-obligation consultation. You can also email us at info@ruthkrishnan.com.

It is impossible to know how median and average value statistics apply to any particular home without a specific comparative market analysis. These analyses were made in good faith with data from sources deemed reliable, but may contain errors and are subject to revision. It is not our intent to convince you of a particular position, but to attempt to provide straightforward data and analysis, so you can make your own informed decisions. Median and average statistics are enormous generalities: There are hundreds of different markets in San Francisc and the Bay Area, each with its own unique dynamics. Median prices and average dollar per square foot values can be and often are affected by other factors besides changes in fair market value. Longer term trends are much more meaningful than short-term.

Compass is a real estate broker licensed by the State of California, DRE 01527235. Equal Housing Opportunity. This report has been prepared solely for information purposes. The information herein is based on or derived from information generally available to the public and/or from sources believed to be reliable. No representation or warranty can be given with respect to the accuracy or completeness of the information. Compass disclaims any and all liability relating to this report, including without limitation any express or implied representations or warranties for statements contained in, and omissions from, the report. Nothing contained herein is intended to be or should be read as any regulatory, legal, tax, accounting or other advice and Compass does not provide such advice. All opinions are subject to change without notice. Compass makes no representation regarding the accuracy of any statements regarding any references to the laws, statutes or regulations of any state are those of the author(s). Past performance is no guarantee of future results.